Animals are weird when it comes to behaviors. I mean they are full of love and everything but sometimes you can see some weird pairs of animals hanging around each other. I’ve already told you that I had a dog and a cat, remember? Well, I have a video on my phone of the cat licking the dog, while he was sleeping. She was actually cleaning him I swear, just like she would clean herself. While it was one of the sweetest things to see, it was kind of weird. 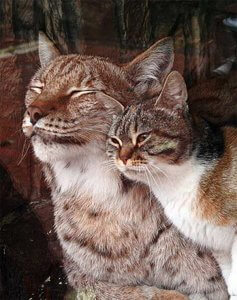 A cat and a lynx have become friends at the zoo that the stray cat had broken in to. It seemed that the lynx apparently liked the cat, despite being a wild animal. You can see the lynx licking the cat and just staying with her like best pals. Perhaps the lynx was just bored from the same old cage and some company would not hurt. Especially company from a small feline. The cat had made her way into the zoo and then without fear she had entered the lynx’s cage where she was later found and removed by the workers. 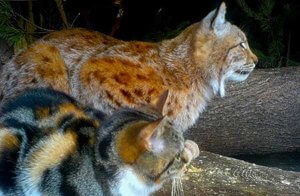 But the cat had returned again and the workers decided to just leave her where she pleases to be. To be honest it is quite an attraction for the tourists and the visitors to see a stray cat and a lynx just staying together like nothing is wrong with that. More and more people are visiting now after they have heard the news. That’s one thing that I love about animals. They know how to love unconditionally and stay together despite their race, color or whatever differences might there be. They just enjoy the moment. 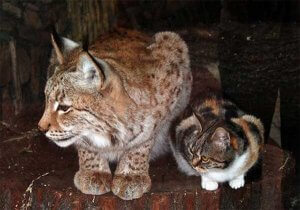