It is no news now that the royal baby has ben born. This was through Harry and Meghan. The baby was born early this week. The birth of the royal baby sparked a lot of controversy like the tweet Baker, the radio presenter and comedian, released after the parents were pictured coming out of the hospital with the new born. This tweet caused him his job at BBC live because a lot people reacted to it as being racist. Putting that aside, the name of our royal baby as been announced by Harry and Meghan. They announced that the name of their son will be Archie Harrison Mountbatten-Windsor. Wow, such a nice name for the royal baby. I wish I could name my child Archie when I have one.

A photo of the Queen and Prince Philip meeting the new baby Archie was posted on the couple’s official Instagram page, with a caption that read: “The Duke and Duchess of Sussex are pleased to announce they have named their first born child: Archie Harrison Mountbatten-Windsor.

“This afternoon Their Royal Highnesses introduced Her majesty The Queen to her eighth great-grandchild at Windsor castle. The Duke of Edinburgh and The Duchess’ mother were also present for this special occasion.” 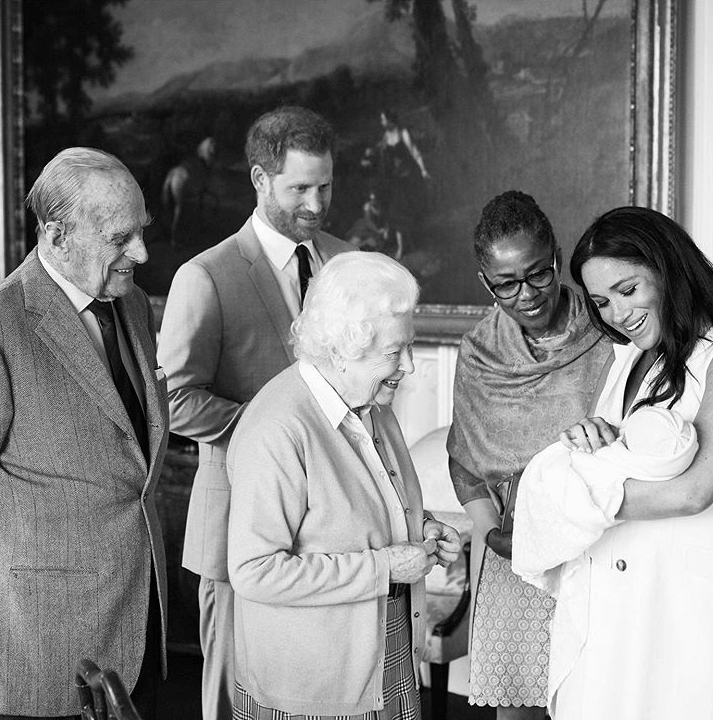 Archie who is the first child of the couple was born on Monday 6 May at 5:26am, weighing 7lb 3oz. They made their appearance as a family earlier today. The proud parents walked out with their child, who was wrapped up in a white shawl, with Meghan telling the world: “He has the sweetest temperament, he’s really calm. He’s been the dream.” Harry chipped in, joking: “I don’t know who he gets that from.” They were asked how their first days as parents had been, to which Meghan responded: “It is magic, it’s pretty amazing.” Harry then added: “It’s great. Parenting is amazing.

“It’s only been two and a half days, three days, but we are just so thrilled to have our own little bundle of joy.”

So which parent does the baby boy resemble the most? It’s pretty hard to see for sure while he’s all wrapped up in that blanket.

“Everyone says that babies change so much over two weeks,” Harry said.

“We are basically monitoring how the changing process happens over this next month really. But his looks are changing every single day, so who knows.”