When parents bring their newborn baby back home, they slowly introduce it to their dog. Dogs usually like little babies and children, but it takes time for them to learn to be gentle with them at the start. Chris Cardinal and his wife were in this same situation. They brought their baby girl Chloe back home and introduced her to their two golden retrievers, Colby and Bleu. For them, it all went perfectly, not only did Colby and Bleu loved the new member in the family, but they also recruited her to be their own partner in crime. 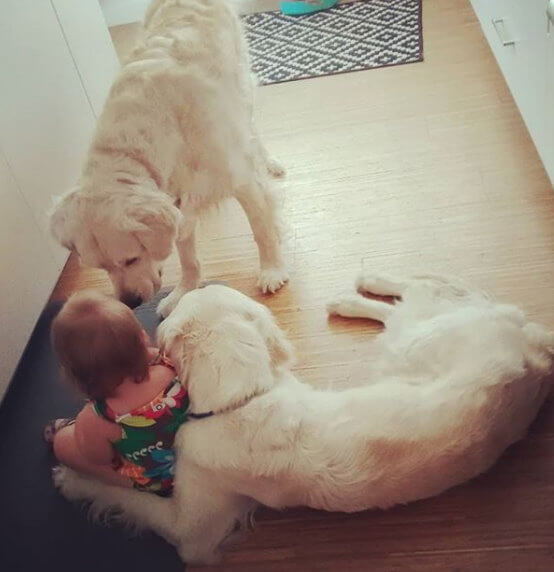 Before Chloe was born, Chris had put cameras all around the house and one in the dog’s room. Colby was caught on camera, learning to open the door by herself. In the video, it shows her getting on her hind legs and opening the bathroom door. Because she was doing this multiple times, Bleu was always behind her, and she figured it out as well. 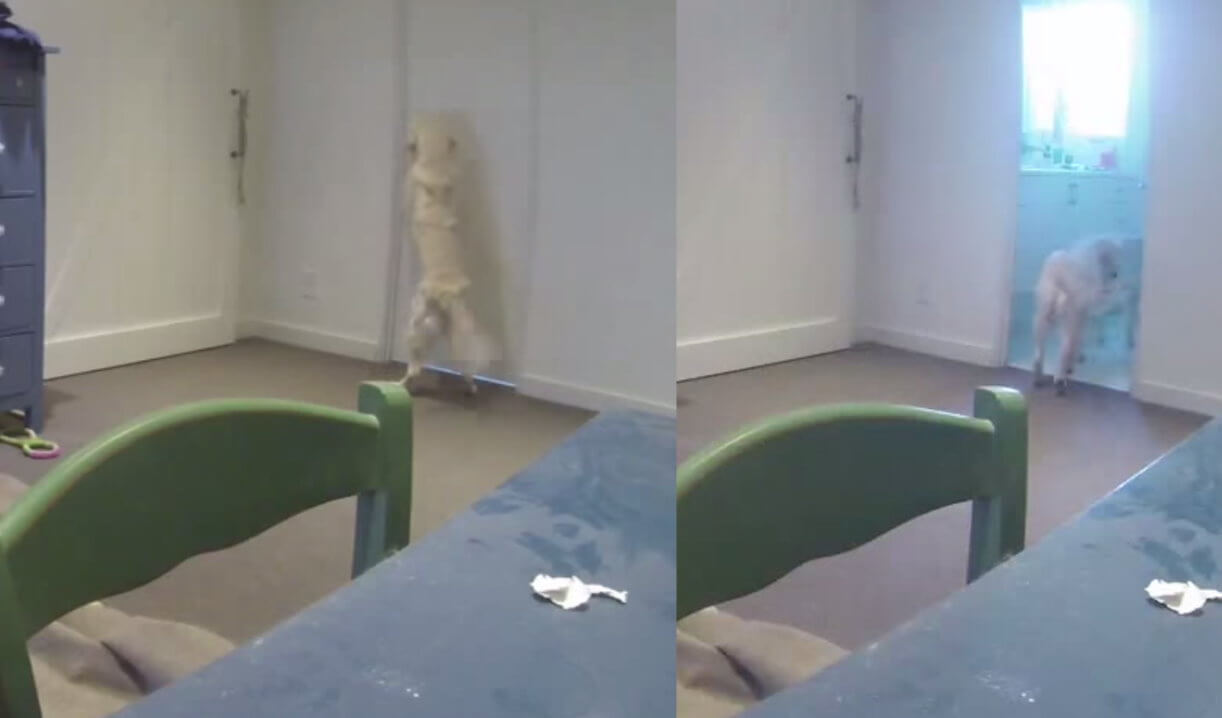 Colby and Bleu have always been on alert when food is being made in the house. Since Chloe was big enough to sit on a high chair and try to eat on her own, the two dogs would sit or lie underneath her. They quickly learned that she unintentionally would drop food on the ground, and they were always there to pick it up.

Colby is like the leader, and where she goes, Bleu is there right beside her. Every morning around 6 o’clock, both of them would stand in front of Chris’s and his wife’s room and start barking because they are hungry. Then ether Chris or his wife would wake up and give them something to eat. One morning was different, 6 o’clock has passed, and the dogs didn’t bark in front of Chris’s and his wife’s room. When they got up, they saw their toddler and their two dogs running around the house.

Chris has said that they had previously got inside Chloe’s room, but at that time, Chloe didn’t know how to walk yet, so it was just the dogs staying with her in her room. This time because it was no barking, Chris thought that the dogs tried to go inside Chloe’s room, wake her up, and see if she could give them some treats. Chloe couldn’t have come out of her room because she isn’t big enough to open the door, so they went to check the footage of the video cameras.

It all started at 6:05 am when Colby and her trusty sidekick Bleu, opened the door and quickly jumped on Chloe’s bed to wake her up. She is woken immediately, and they both start to kiss her, and she starts petting them. They then start going in and out of the room, which can mean that they wanted her to follow them outside. She doesn’t get what they want from her and stands on her bed, watching them run around her room and out of it.

After a couple of tries, Chloe figures out that they wanted her to go with them, so she gets out of bed and follows them to the other room, also walking out of the camera frame. Because there was no barking, Chris knows that Chloe managed to get some snakes or treats to give to them. Chris also knows that Colby and Bleu knew what they were doing, and this wasn’t just going in Chloe’s room to wake her up.

The footage of these three partners in crime is adorable, and seeing how smart these dogs are is fantastic.